'NOT BAD FOR A BUNCH OF FARM BOYS'

From their headquarters in rural Wadena, Kern Laser Systems and Kern Technologies are family businesses that have partnered with national players as large as Lockheed Martin, Boeing, NASA, and the U.S. military. They even have an international presence in Australia, the United Arab Emirates, and Japan.
“We have a machine in every continent besides Antarctica,” Derek Kern, president and CEO of Kern Laser Systems, says.

Not bad for a “bunch of farm boys,” says Derek’s brother, Aaron Kern, president and CEO of Kern Technologies.

Today, the pair of cutting-edge, laser tech companies have a combined revenue of $15 million and sell to manufacturers of high-end consumer electronics, electronic signage, and aviation equipment. Such an outcome may have seemed unlikely in 1982. A father of four and respected professor of electronics and telecommunications at Wadena Vocational Technical College, Gerald Kern was an entrepreneur possessed by an endless curiosity for tinkering and invention. His company began in the family garage. Through experimentation, Gerald developed a motorized X/Y gantry system and imagined agricultural applications, among others, for his new product.

But with plenty on his plate already, it took no small amount of grit to keep moving forward.

“On his lunch break, he would run to the shop, do sales calls, check on the guys—all while trying to raise a family,” Derek remembers. “When he built the company up to a certain degree, he quit teaching and invested all his time in the business.”

Lightning struck, however, following Gerald’s introduction to the late Peter Laakmann—a pioneer of CO2 laser technology. Pairing one of Laakmann’s Synrad-branded lasers to a Kern motorized gantry, Gerald had stumbled onto an idea with potential. Though still an early prototype, the product would be refined and eventually capable of computerized cutting and engraving, much like the products the company now sells nearly 40 years later.

The epiphany marked the birth of Kern Laser Systems.

In 2019, the Kern brand exists as both Kern Laser Systems and Kern Technologies, run by two of Gerald’s sons. For brothers Derek and Aaron Kern, involvement in the family business came at a young age. The pair remember clearly their father’s home-based laser experiments and the warning light on the family garage during working hours that told them the space was off-limits.

After graduating from high school some years apart, each brother moved away for college—Derek to Fargo’s North Dakota State University, and Aaron to the University of Minnesota, Minneapolis.

Today, both admit they anticipated returning home post-college to family and friends, but the “why” and “when” couldn’t have been predicted.

“I don’t know if I always knew that I would be back with the company the Monday after I graduated,” Derek explains. “I always thought I’d go somewhere for a year or two first, but it just never happened.”

Armed with a degree in management information systems, Derek found himself taking over Kern Laser Systems’ website. His involvement ramped up quickly. As Gerald sought to transfer leadership of the business, Derek proved himself to his father by taking on the weight. Around 2010, he was named president and CEO.

“I think the biggest challenge was just the stage we were at, as far as growth. We were growing really fast, and my dad—he was more of an inventor—didn’t want to grow the company; it wasn’t something that really appealed to him,” Derek says. “My first months at the helm, going to trade shows, setting up distributors internationally, was all brand new to me.”

Aaron returned in 2014, just one year after a second company, Kern Technologies, was formed to handle the R&D behind the in-house laser systems Gerald began designing in 2005. Fresh out of college himself, Aaron describes the whirlwind process of taking over that young company as a considerable test of his aptitude, as well as a lesson in humility. It’s a task, he says, which could never have been accomplished without the aid of experienced, veteran employees at both companies who were gifted with the patience to teach and the willingness to work together as a team.

“If I had any questions, I could talk to Derek or other managers,” Aaron remembers. “It was just me over there for a lot of the different departments, but I still had people with experience that helped guide me along too.” 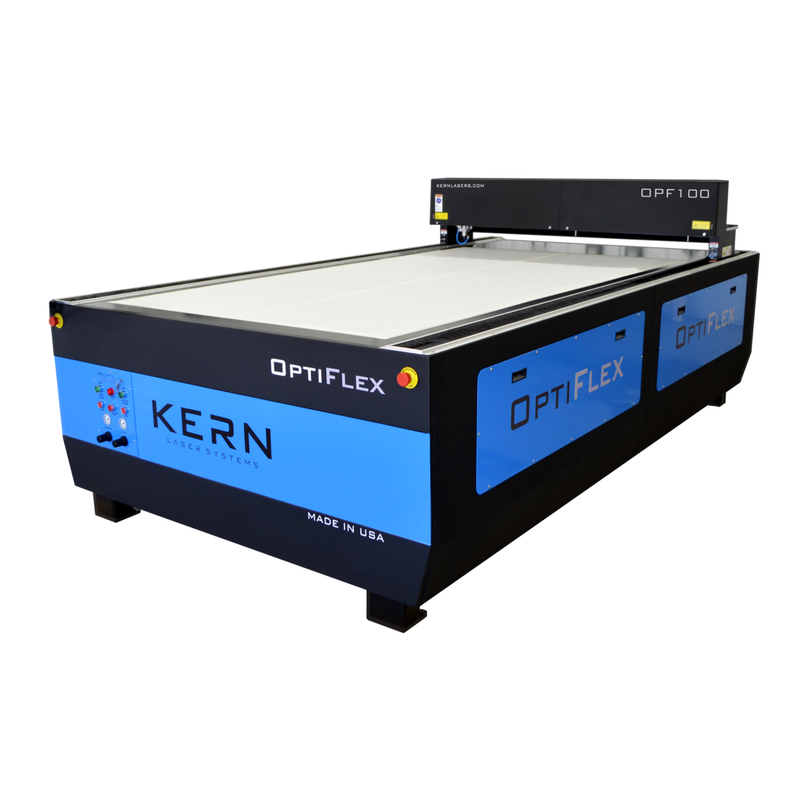 The HyperDual motion package installed on the OptiFlex is setting the standard for large format laser cutting and engraving machines.

This improved motion system features a rack and pinion design and powerful servo motors at each side of the laser table.

Cut acceleration rates are up to three times faster with a 100% increase in top end vector speed. The X axis has also been upgraded with twin linear rails and a thicker steel reinforced belt. 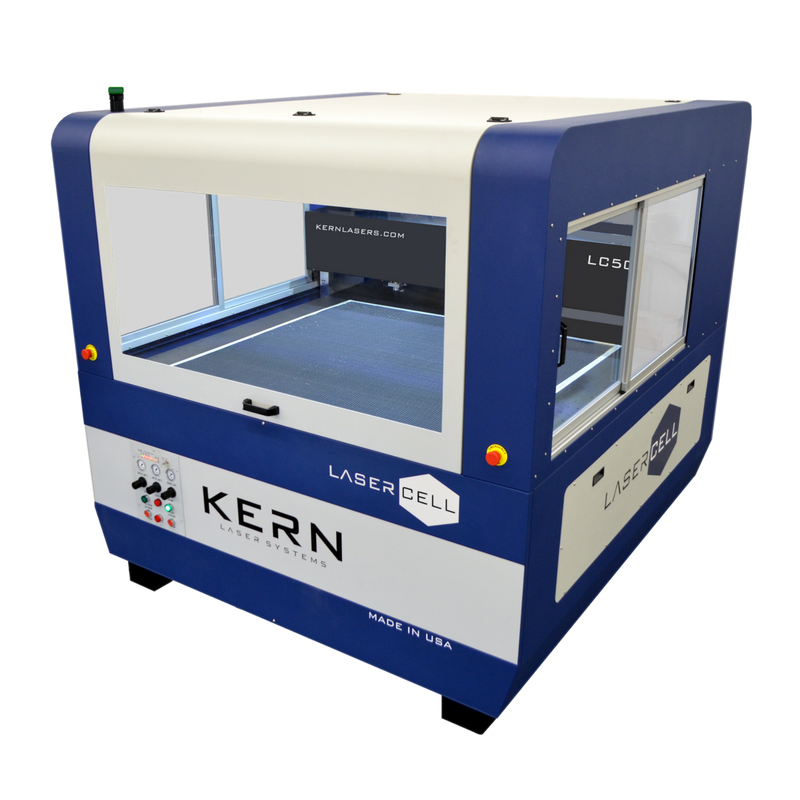 The LaserCELL is a complete laser cutting and engraving system featuring the perfect blend of performance and safety.

The Class 1 safety enclosure allows the system to be placed in high traffic areas such as busy factory floors and university classrooms. 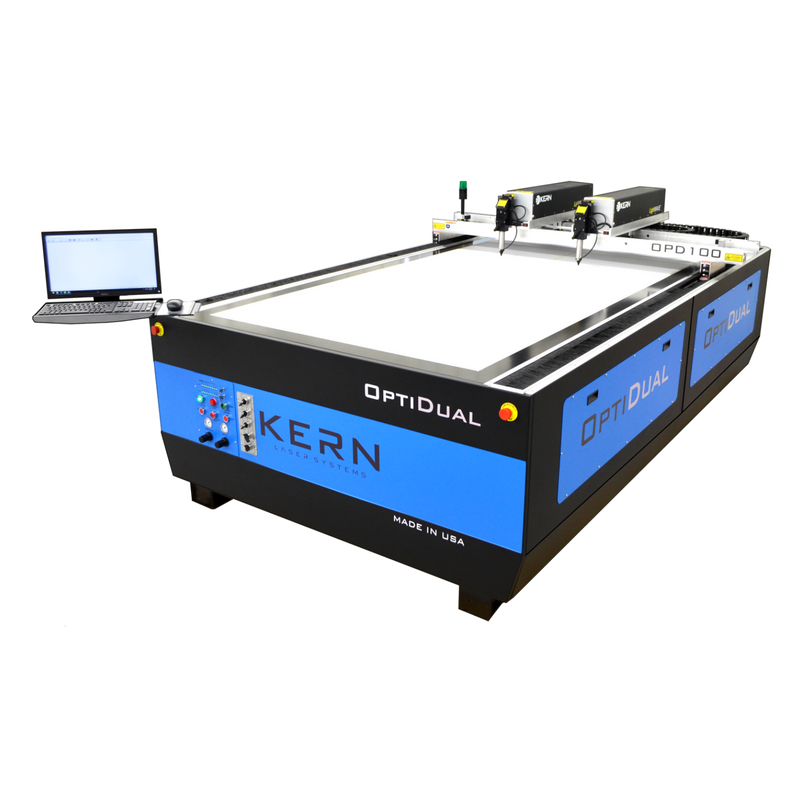 The OptiDual Laser System was specially designed for customers that require a laser system capable of high production cutting.

The OptiDual features two lasers mounted on a single gantry. The second laser is connected to the master laser by an adjustable bar.